Mobile applications have traditionally been written in native languages. Lately, however, hybrid cross-platform frameworks have been gaining market share. The recent swell of React Native’s popularity has raised the question: should developers use React Native for mobile development instead of full native?

In the last 4 years, React Native has grown to a community of over 2,000 contributors that averages 300,000+ weekly downloads through npm. Some of the largest companies in the world have embraced React Native, including Facebook, Pinterest, Skype, Uber, and Brex. Its widespread adoption is primarily driven by the convenience of its cross-platform nature and the unique technological approach used to accomplish this.

Despite React Native’s success, many people maintain that traditional native mobile apps are still the way to go. The proponents of native primarily cite its performance advantages and robustness when compared to hybrid alternatives. Tradeoffs exist between both options, and careful consideration is required when choosing between the two technologies. This article will weigh in on the matter by delving into what makes React Native so popular and explore how it works under the hood. We’ll also look at the pros, cons, and business impacts of each option, giving you the facts worth knowing before making a choice one way or another.

React Native is written primarily with JavaScript and classified as a “hybrid” framework, meaning it’s platform-independent. This separates it from traditional apps written in native languages such as Java or Kotlin for Android, and Swift or Objective-C for Apple. Instead, hybrid apps have a single codebase that produces an app that will run on both Android and iOS devices. The benefit to this is obvious: less code and related logistics when compared to writing a pair of native apps using different languages. The drawbacks of hybrids are that they aren’t as performant as their native equivalents, and they sometimes lack the ability to make full use of a device’s resources.

Most hybrid frameworks that you may be familiar with, such as Ionic, Cordova, and Phonegap, rely on what’s known as a WebView to accomplish their cross-platform capabilities. Essentially, they embed a webpage inside a native app and hook into it to integrate with the underlying device. The problem with this is that WebViews, especially when hosting complicated apps, run into performance issues and have other limitations.

React Native does things a little differently. It doesn’t use WebViews, but rather a system that allows it to render native components (hence the name) from its base JavaScript code. There’s a common misconception that React Native compiles JavaScript down to native languages such as Swift or Java, but that isn’t the case. To get a better understanding, let’s compare the underlying structure of a “Hello World” app featuring a labeled button written in React Native to its equivalent native iOS version: 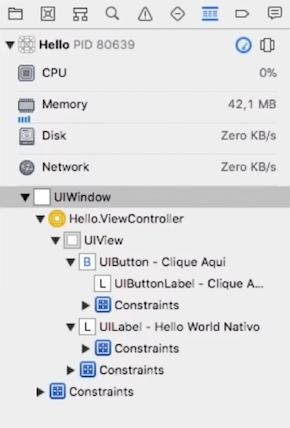 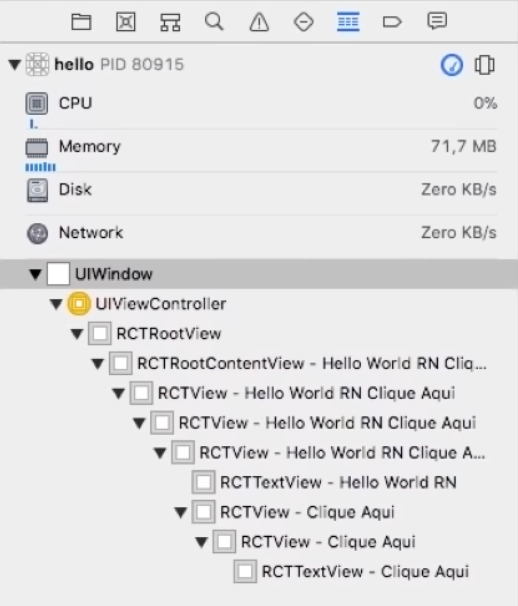 Obviously, the native iOS version looks “cleaner,” but that isn’t really a concern here. What’s important is that we see there are no WebViews in use. Instead, we have a set of native components. The stack of views in the React Native example is simply forming the basic responsive layout of the app, given that React Native uses Flexbox. The performance impact of this is essentially nominal and well worth it, given that the need for WebViews has been removed.

However, there are still some performance concerns worth noting when analyzing how React Native achieves this feat.

How does React Native work exactly?

In a React Native app, its JavaScript logic runs in a dedicated thread, while the rest of the app runs in what we’ll call “the native realm.” JavaScript handles the business logic of the application, while the native realm renders the UI and manages device interactions. These two domains rely on something called “the Bridge” to communicate.

The JavaScript thread and the native realm can’t have a direct conversation – they are unable to listen, respond to, or cancel events and operations happening on the opposite side. Instead, they pass serialized messages back and forth via asynchronous message queues. This system “bridges” the gap.

For example, React Native may send a message to the native realm saying “render this button,” to which upon receipt (i.e., the next time it checks the message queue), native does. Later on, when the user clicks on this button, native dispatches a message to the JavaScript thread informing it of the action, triggering some associated application logic, resulting in a UI update being pushed back into the queue for native… and so on.

Due to the disconnected and asynchronous nature of this means of communication, some performance issues can arise. Queues can get bogged down, say, for example, if the user is rapidly scrolling through a long and complicated list – many “user has scrolled” and “draw this new UI” updates fly back and forth. For a similar reason, animations can also be a point of concern. In reality, most of the time, these kinds of performance deficits are negligible to the user; however, they are still something developers need to be aware of so they can be designed around.

The good news is that initiatives such as the JSI (JavaScript Interface) are in development to replace the Bridge with something better. Developers can also use native modules to supplement their app with truly native code to leverage device-specific functionality or address performance issues. This means that having developers familiar with native on your React Native team can be very beneficial.

React Native continues to evolve, given its popularity and supporting community. It remains a top choice for developers and warrants consideration for those thinking of building an app.

Both approaches to mobile development have notable tradeoffs. It’s important to consider the strengths and weaknesses of each option with respect to an application’s use case and your organization’s structure:

The downsides of Full Native can be summed up in one word: logistics. Assuming you are targeting both Android and iOS, you have to do most things twice. Two development teams, two codebases, separate testing and deployment pipelines, and so forth. Not only is there a doubling of most work, but the two streams must be kept in sync, requiring additional oversight and planning. New features and changes have to be coordinated and timed together, and problems quickly arise if one side falls behind or diverges from the other. A solid set of processes is required to keep things running smoothly.

The bottom line is that more time, effort, and money must be expended when compared to hybrid alternatives such as React Native.

With those caveats under consideration, it’s worth reviewing the different situations where it makes sense to choose one approach over the other.

When to use full native

When to use React Native

A mobile app is not just a bunch of lines of code; it’s a business. As such, the decision to choose one path over another is not purely a technical one. The bigger picture and associated implications must be considered when deciding whether React Native or traditional native is to be used as your foundation going forward.

On paper, it seems to make sense to develop natively instead of via an abstracted framework that sits on top of the native realm. Native provides superior performance and gives developers complete access to the capabilities of each device. It’s true that some use cases require this level of control. However, these benefits come at a cost – in the literal sense. The duplication of work and associated logistical effort can be taxing on a business that cannot support it. With that in mind, it may be the case that an alternative approach is more well-suited to your situation.

With React Native, in most cases, you get the best of both worlds: lower effort and associated cost and time to market while still producing a robust and performant app that stands up against its native competition. React Native is often the clear choice for rapid prototyping and the production of MVPs – a process that can serve as an evaluation of whether or not the technology meets the long-term requirements of your project. These benefits make React Native a strong option for a lot of organizations. Still, if you need pure horsepower or have a use case that requires it, native can sometimes remain the way to go.

Ultimately, there is no silver bullet. Careful consideration is required when making such a fundamental decision. Review the benefits and limitations of the choices before you, and don’t be afraid to consult the experts when you need help choosing a path or are ready to get started down one.

Fabio is a Senior Developer from Brazil with expertise in PHP, JavaScript and frontend development. Since 2015, he's been working on exciting projects using both React and React Native for mobile cross-platform development. Even with 15 years of experience in the industry, Fabio believes his journey as a developer is just getting started.

Scalable Path specializes in matching companies with top-tier software developers. Start your next project with us today.